To tug or not to tug? 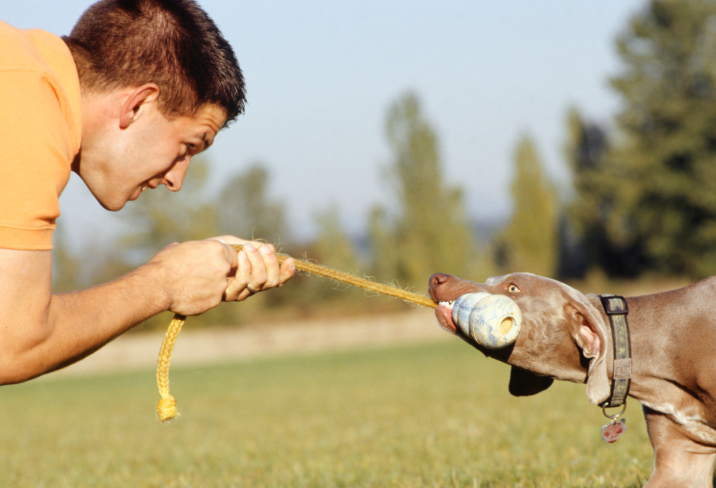 Many dog owners choose to play games of tug with their dogs, believing that it is a healthy, fun game of play
which creates a strong bond between dog and owner, but there are deeper messages being given that
aren’t always good for the dog’s overall well being.

I saw a client recently for some assistance with a leash reactive Collie. The dog was pulling
excessively on the lead and always barked and lunged any time it saw another dog. The owner was
unable to control the dogs energy and focus, so the battle was always lost before they had even
stepped foot out of the house.

We worked outside on the street, focusing on lead etiquette, and being a Collie the dog was quick to
learn. The real challenge was to keep the engery levels calm, to control the mind so that it didn’t get
carried away at every movement or sound. After some time the dog began to understand what the
owner wanted from it and she became more relaxed and less reactive. Some simple lead techniques
were used to reward the dog for walking at heel and discourage it from pulling.

During the exercise the dust cart came down the road to collect empty bottles. Collies can be
hypersensitive to sound so I decided to move into the clients garden to continue working. As soon as
we entered the garden came the switch – BANG! The dog became extremely hyperactive and the
energy levels shot right up in an instant. She began pacing, panting, circling, jumping up, whining,
unable to focus on the simple tasks we had been working on so well just moments before. The dog
then picked up a football and brought it to its owner growling with clenched teeth, the dogs eyes were
hard, fierce, intense and with intent. Taken aback by the change in behaviour I asked the client what
they did in the garden and she revealed to me that she normally exercises the dog in the space with
games of chase and tug over footballs and ropes. And therein lies the problem. The dog associated
that space with that the activities of hunting, chasing, tugging, fighting over objects and so on.
The owner also revealed the dog growled in the same way It growled with the ball, at her son in the
house. It was quite remarkable to see such a difference from calm to frantic in a split second because
of the association to the area.

Think carefully about engaging in games of tug with your dog, especially if it has reactivity on the lead
or any signs of aggression. Engaging in tug sends signals that you want to be challenged, physically
and mentally. A good pack leader will never challenge its pack, it will simply provide leadership and
protection. Even the smallest of dogs are very strong in the jaw and most are more agile than we can
ever be. Humans can never beat a dog in a game of chase! So you can never win. Dogs interpret this
behaviour as a test of strength and power, and it quickly reveals our weaknesses and weakens the
position as leader.
Games of tug bring out the natural, predatory, killer instinct in dogs and encourage them and rewards
them for sinking their teeth in and ripping soft objects to pieces. Is this what we want from our pet
dogs? Do we want our dogs to think it is OK to rag-doll and rip and tear objects with a view to kill?
What-if one day-the dog sees a child's toy and decides to play the same game that it’s always played
at home or in the garden? The consequences are unthinkable. It is better to promote a state of calm
with our dogs and to encourage them to use their nose as an alternative source of entertainment.
When dogs use their noses it burns a lot in a mental energy and so provides a mental work-out with-
out ramping up the energy levels in the body.

Is it fair to expect our dogs to switch off when the game
of tug has ended because the owner has decided they don't want to play for any more? Is it fair to
expect the dog to understand It is OK To rag-doll the squeaky toy at home but it is not OK to rag-doll
the next door neighbour's cat? I believe not.

Dogs do not differentiate between a toy squirrel and a real one. I have yet to see a dog put the brakes
on by itself when chasing a live squirrel! Think about a pack of hounds on a fox, they will all rip and tear and shake whatever they can get their teeth into, the mind is focused on killing and eating.

There is a problem with increasing aggression in our dogs today and I believe that these games are part of the problem. In nearly all of the aggression cases I deal with the dog has been encouraged to play tug. My advice is always to stop these games immediately.

We owe it to our dogs to give them consistent, clear signals about what it is we expect from them in order for them to behave as we want them to, like happy relaxed pets.